What a lovely morning today at Nanmangalam RF.  Looking back at my blog, I realise its been years (12 years in fact!) since I went in there.  IN 2008, I went on a nature walk with MNS and Bhanu in there, and was introduced to the many wonders of the TDEF including the GHO.  I re-read with amusement trying to find my way there - (no Google Maps).

Our son (a dramatis personae in many of my visits in two Nanmangalam) has "fledged" and the years have well, fled, and to my surprise, Nanmangalam looked better - cleaner, less garbage and more forested.

Left home at 530 am, picked up Sagarika along the way and arrived at the gates by 615, and as soon as we entered the gates there was that nice woody smell, and the air was cooler.  Almost immediately, the road noises died, and were replaced by the calls of the Brainfever bird and an Asian Koel, almost like a welcome.

At the Interpretation Centre, I looked around and was astonished at the growth of all the little saplings I had seen those many years ago.  How nice to see a tall Red Sanders, Teak trees and scrub too.  Most of us do not appreciate scrub enough - it is such a wonderful host to bird and insect life.

Companions today were the MNS Backbencher gang, with some additions - Janani whom I met for the first time and realised that she was born after I graduated, and Vidya from Stella Maris.  Srinivas it was with whom we went.  Janani, Umesh and Sagarika were the photographers with their serious equipment, Vidya was making a list, pen-on-paper, Srinivas was logging directly into his e-bird list, Kalpana was busy with flora too....and I was the one who had no agenda... no responsibility...very nice indeed.  Just binocularing and bipedding.

There is a joy in malingering and dawdling when in a forest.  Every step brings some new delight.  Munias in large flocks sped by from east to west.  At least 200 or more, probably scaly-breasted.  The Francolins called from the scrub.

Red Whiskered Bulbuls called cheerfully as I admired the different kinds of white flowers growing in the sides of the track.

Lifers for me - Much excitement over a fleeting glimpse over a Forest Wagtail - which I have not seen in all these years, and that very uncommon Common Babbler.

We were reluctant to leave, enjoying the Shikras in the air, the Laughing Doves and Coppersmith Barbets calling, Drongos snapping up insects on the go, and that unbelievably brilliantly coloured Green Bee-eater. Srinivas gently trying to make us get a move on - its a difficult job getting MNS sorts moving - Sekar will vouch for it.
Now, the butterflies also began to appear, and our return was spent with Sagarika, Kalpana and Vidya trying to capture those flutterbys.  I watched them, crouch and squat, crane their necks and focus, focus.  They looked as industrious as the other creatures of the forest.  I was the indolent day dreamer, the lotus eater, rambling with my binoculars!!

Srinivas completed his e-bird list on-the-go, and said 53 species at the end of the walk, as we headed home.
As we drove back through Velachery/Vijaynagar, I was also filled with other memories - of Navadisha, Montessori, yearly rain holidays, Mothi Travels, chittis. "Good old days", as my father always likes to say.

(And I crossed 100 bird species seen this year.) 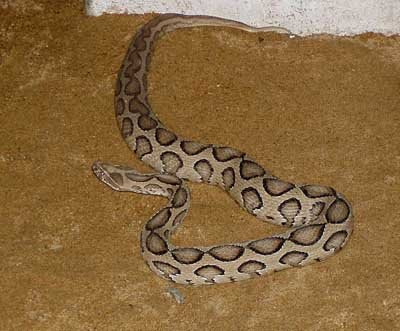 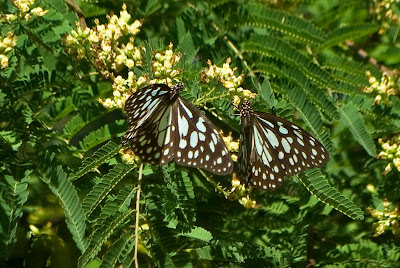 Of crows and tigers - a tale from GNP